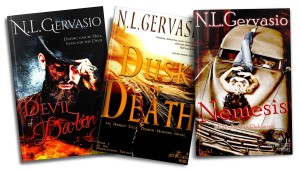 When I was eight years old, my maternal grandmother gave me a typewriter and taught me how to type on it. Both of my grandmothers worked at Arizona State University back in the day. Anyway, g-ma Ethel was my first typing instructor and what she taught me that day stayed with me until my freshman year in high school where I took a typing course. Back then it was still called Typing and it was done on electric typewriters. The only computer I ever touched in high school was a Macintosh SE II in art class my junior/senior year. It was the 80s, what can I say. But because of what my grandma taught me that day, on where to place my fingers and how to move them to the other keys, I haven’t had to look at my keyboard when I type for about 40 years.

I also wrote a book when I was eight years old using that little plastic typewriter. The title was “Wild Horses” because it was about, y’know, horses. Like, duh. What else do 8-year-old little girls think about? We’ll chalk it up to my overactive imagination and daydreaming. I’m a daydream factory. Still. I should just start dictating this shit. That’s how I started writing in the first place as an adult. One day I thought, “I should write this shit down.” So I did. And then I elaborated and spun other fun stuff into the daydreams. I always have a basic story running through my mind. Always. Anyway, so I wrote this book about horses. I wanted a horse real bad but that was never going to happen. Such is my life being a “city” girl. When I wrote the book, I had cut all the paper to the size I wanted the book to be, then I’d type each part on each page, and then I’d add the drawings … of horses. When I’d finished the story and the drawings, title page included, I bound the pages all together with my stapler; hence, producing my very first book. I gave it to Umi (my mother). I didn’t know what else to do with it. She probably still has it somewhere, unless it’s been lost in one of our many moves over the years.

There was a time in 2003 when I read a story about a woman who was selling PDFs of her book online, and Stephen King thought it was an interesting idea so he decided to test the market, which was pretty damn small at the time, and I’d thought, “y’know, that is a pretty good idea and it’s gonna be HUGE,” but I didn’t know how to make it work for me. It’s not like all these online publishers existed back then, and the traditional publishing companies took another 10 goddamn years to catch on. Googling it didn’t help much either because again, no information existed yet on how to publish and sell a fucking eBook. And I had not one clue on how/where to start. Life usually interrupts these moments for me. I’ll start to gain momentum on something, exploring and learning and creating, etc., and then Life laughs as it pulls the rug out from under me, saying, “Oh, ha ha, sorry about that but I need your attention over here for the next SEVERAL years” and before I know it, everybody is producing eBooks and some e-publishers are millionaires. Thanks a lot, Life. Fuck you.

I saw this image posted on someone’s Facebook wall recently, and it got me thinking about my teachers way back when and if any of them encouraged me in such a way. Mrs. Christiansen, my senior English teacher, was probably the closest I can think of that encouraged me in any way. She was this tiny elder lady who was soft-spoken and gentle and kind; she reminded me of my grandma in some ways. She enjoyed my poetry, anyway. I wasn’t much into writing stories yet and I was reading horror novels. One day she asked me to stay after class. There was a paper bag on her desk, and she told me that a friend had made something for her once and she’d like for me to have it because she thought it would look nice on me. It was a gray hand-crocheted vest with black suede diamond-ish panels in the front, and I nearly cried. No teacher had ever done something like that for me, gifted me with such a wonderful item that someone they knew had made. The fact that I still write at all is because of her. Though I can’t recall her telling me that I could be a writer, like the image states his teacher did, I can say that she was the only teacher who really showed any interest in my writing and she did encourage me in small ways. She also loved my artwork. Both appeared in the school magazine at one point or another. This isn’t to say that my teachers didn’t encourage me, but more to say that I don’t have any clear memory that stands out of a teacher outright telling me “hey, you could be a writer someday.” Mrs. Christiansen is all I’ve got. The reason this is remotely interesting to me, and the memory that image prompted when viewing it, is because two years prior to meeting Mrs. Christiansen I was a sophomore, and in my sophomore English class at some point during the year, we took a district-wide or state-wide test that consisted of true/false, multiple choice, and fill in the blank questions. But at the end was an essay and the writing prompt was written on the board. I don’t exactly recall the prompt, but I do recall the memory or topic it prompted. I wrote about my grandpa Jim being a coal miner that day, and I think it involved either the lantern that now sits on my bookshelf, or one of the many stories my g-pa told me of his days working in the coal mines of Pennsylvania. I don’t remember much else about it. At 50, my memory is kinda shot. But aside from that, what I do recall is that a few weeks later, the teachers who had entered my classroom and had given us that test returned with the results. They talked to us about however many students ranked in the 90-percentile group, and how only one student ranked at 100% out of everyone tested. Like I said, this was either district-wide or state-wide, but I can’t remember. It could have just been school-wide for all I know. Then I noticed everyone was staring at me. ME. And clapping. What was happening? It took a minute before I realized she’d said my name, and that that 100% was attached to it. I literally said, “what?” aloud. It was the strangest moment of my life, but for a girl who was indescribably insecure, it was also triumphant. It gave me a sense of purpose, in a way, when my world was so dark.

You know what teacher I remember the most? The one that I hope is, if Hell is a place that actually exists, burning in it. It’s not just your words, teachers, that you shouldn’t underestimate; it’s your actions as well, your body language. ALL OF IT.

I still have that vest. It’s in my closet. Can’t wear it now to save my life, but it’ll be there until I die. And it’s still in perfect condition. I’ll probably pass it on to my grandniece Lorelei. She the weird one now, and this is definitely something that should go to someone who appreciates the strange and unusual. I think Mrs. Christiansen would have liked that.