Okay, look…I know I just released one last fall and this might be a bit too soon considering it’s usually years between book releases from me, but let’s try to move past that and celebrate. Not-so-coincidentally, this new book—The Devil of Dating—shares the same world as Dusk of Death (released in August) and there will be more novellas that spin off the main trilogy.

To be honest, I’m just happy to be writing again. Finally.

What’s it about, you ask? Well, lemme tell ya! I’ve decided to mesh Greek mythology with good ol’ Christianity for this because why the fuck not, right? It’s fiction; let’s have some fun!

When you’re the Prince of Darkness, how do you find true love?

Aside from lacking in the love department, Luc is having difficulty maintaining Hell and desperately needs a vacation, but when you’re the type to take on everything yourself and don’t always delegate, bad things tend to happen. Like when the harpies escaped and nearly took out a small village, or when his dog got loose and took on the traits of its father, the guard dog from Hell. If Luc doesn’t get his life together soon, there will literally be hell to pay. Behind every semi-functional man is a great woman keeping his ass in line. Luc needs a woman, and soon. Considering Hell’s state of affairs, solitary life hasn’t really worked out for him thus far. Is true love even attainable for the first Fallen?

Badboy69 – Lonely Devil looking for a match made in Hell. Must love dogs…and play well with demons.

Seph keeps finding love in all the wrong places, and is tired of men breaking her heart. Joining a dating site wasn’t the brightest idea, but when she meets Luc, it seems as though the Universe finally grants her wish. She gets bad boy, hot, and powerful all rolled into one. Little does she know, Luc is the Prince of Darkness.

26Proserpina – Lonely Maiden looking for the king to her queen, to rule the world together.

If you haven’t guessed yet, this book is paranormal romantic comedy. Where Dusk of Death focused more on the thriller aspect of the story, The Devil of Dating is just pure romantic silly sex-filled fun. Sounds like a blast, right?  Well, why not check out an excerpt! Here’s a sneak peek of the opening for ya! 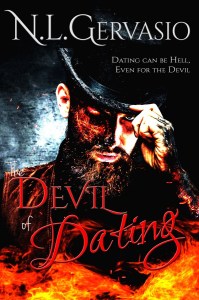 A solitary thin vertical black line mocked Luc in its frozen state as he moved the mouse across its pad. Click. Click. Click. Not even a blink. Bang. The poor plastic creature objected with a groan at being slammed against the wooden desk.

Several beeps sounded from the laptop as the piece of technology protested. Not a good sign.

“Damn this thing!” Luc squeezed the defenseless mouse, but let go before he crushed the poor plastic device and broke yet another one. He let out a low growl and footsteps greeted his ears, signaling that someone had entered the room. Normally, his growling was a sign to stay the hell away from him; however, this visitor knew Luc better than anyone else and was probably the only person who could approach him in his angered state.

“Abercrombie, remind me to torture Gates,” Luc said. “This computer is the bane of my existence.”

“Of course, sir, I’ll mark it in Outlook for you.” Abercrombie placed a cup of tea on the desk.

“Is that the Earl Grey?” Luc reached for it as the butler nodded. “Do we have any of those little Danishes left?”

“I have some right here for you, sir.” He placed a small plate on the desk next to the tea saucer, hit a few keys on the computer’s keyboard, turned and left the room, leaving Luc to the now unfrozen computer to search the dating site once again. It had been damn near twenty years he’d used a computer for his business ventures and he still didn’t know how Abercrombie magically fixed the blasted thing when it froze. Luc was more prone to setting them on fire when they stopped working.

He scanned the profiles on Cinder.hell. Cinder: bring the heat back into your life. Cheesiest fucking tagline ever, but he had to give Dagon credit; it fucking worked.

“Boring.” Click. “Fake…everything.” Click. “Con artist.” Click. “Gold-digger.” Click. “Male.” He paused a moment with a raised brow. Click. “Isn’t there anyone on this damn site who actually wants to date?” Of course, “boring” probably did, but he wasn’t interested in that right now? “Boring” wasn’t exactly boring, or she wouldn’t be in Hell. His lack of interest stemmed more from the fact that he was bored with the cray-cray because it was exactly the same shit with every one of them. Under normal circumstances, a few of those options would pique his interest, but not this time. He wasn’t looking for sex. He could acquire that whenever he wanted.

“No luck, sir?” Abercrombie returned with a tablet—no doubt the list of beggars asking for everything they desired—and placed it on the other side of the desk. He’d attend to it shortly.

Luc leaned back in his chair, took the mug of tea, and brought it slowly to his lips. “Everyone’s looking for their soul mate, but no one wants to actually find one. They just want to fuck, which I wouldn’t normally object to and I do realize this is Hell and all, but I’m looking for a bit more this time. Someone with substance, maybe sassy, smart, and sexy.” He took a sip of tea. “And then there are the scam artists.” He shook his head and sighed.

“The Tunisian ones?” Abercrombie looked at the screen. “Don’t they work for you?”

“Not just the Tunisians, all of them—the Nigerians, the Russians, even the Americans—and they’re doing a shitty job,” Luc said. “They’re easy to spot. I don’t even want to know what their ‘inheritance’ emails look like. And how did they get on this site? I mean, it’s a .hell website, for fuck’s sake!”

“Dagon needs to not intermingle our network with the humans’.” He took another sip of tea and picked up a Danish. “I should just demolish the buildings they’re working out of.” Luc looked up at his butler. “What do you think? Big explosion, make it look like an accident? Or perhaps an earthquake.”

“Done! I’ll send a memo to Poseidon. He can shove the tectonic plates around near each one.” Luc stuffed the mini Danish into his mouth and looked at the screen again. A new picture caught his attention and he stopped chewing. He didn’t remember clicking to the next profile, but there she was in all her gorgeous goddess-like glory. He swallowed his food in one gulp.

“What about her, eh, Abercrombie?” He looked up at him and grinned. “Think she can handle me?”

The butler leaned forward to get a better view of the female. “Long black hair, dark blue eyes, has that exotic look you seem to like. And look, she likes imps.” He pointed to the screen.

“She does?” Luc looked closer at her profile. “Well, look at that, she does.” On her—26proserpina—profile, under “pets” it said she liked all manner of creatures, up to and including the little imps that attempted to torture her day in, day out. “Hmm, lips, flaming heart, wink, or message?” He looked back to the monitor. “It’s like Dagon compiled every dating site ever invented into one with exception to that swiping one.”

“She did, sir, and you should just go straight for the throat,” Abercrombie said. “In a manner of speaking, that is. Message her.”

Luc grinned. “I think I will.”

“And what about the two ladies in your room, sir?”

Luc looked up at the aged Englishman. “They’re still here? Shit. I completely forgot. Take care of them for me, would you?”

“Very well, sir,” Abercrombie said and shuffled out of the room, but he turned at the last minute. “Furnace or fields, sir?”

Distracted, Luc snapped his head around. “What? Oh, just send them back into the world. If this doesn’t work out, I might want them again later.” Twins. Never kill off a set of good twins. Unless it’s absolutely necessary, of course.

“As you wish, sir.” The butler left the room.

Luc snapped his fingers and pointed at his head while trying to find the words he wanted to say before the butler was out of earshot. “Don’t forget to do the mind thing.”

He clicked on the message button to send 26proserpina a quick note. It took about as long as Abercrombie removing the twins from his bedroom and the house to write the blasted thing. He sent the note, asking Proserpina if she’d like to meet over coffee sometime. Simple. Sweet. Non-creepy. He hoped. It’d work or not, but seeing her photo—if it really was her in the photo; even he couldn’t tell that—stopped his entire world for that one small moment, so for the first time in a long time, he finally had hope again that he’d find his queen. He scratched his bearded chin and stood, leaving his study and heading for the master bedroom to prepare for his day.

He dressed in a nice black Armani suit, black shirt, and red tie—his favorite look—and grabbed the tablet left on his desk in the study before he vanished in a cloud of smoke, reappearing in his throne room. Checking the goings-on in Hell was the last thing on his mind, but he had to be certain all was running smoothly lest the harpies escape again or Kerberos get out. Besides, it was the day to hear from his people and those who needed help with one thing or another. As if he didn’t have enough shit on his plate, people were asking the world of him. At least he’d get something out of it.

He rubbed his hands together and clapped once. “Time to make some deals,” he said and sat on his throne.

The first approached, guided by a demon. Human. Figured. Just how he didn’t want to start his day. He’d need some strong coffee to get through this.

WHEN and WHERE can you get this spectacular paranormal romantic comedy? Well, you can pre-order HERE. Release day is May 23rd.

If you’re going to Phoenix Comicon this year over Memorial Day weekend, stop by the booth to say hi! You can find me at booth AA1028/1030, hanging out with my friends Gary and Maria Wilson from Nightstalker Press. Sign up for the newsletter at comicon and you can win a signed book of your choice. Purchase a signed copy of available books from me/Just Ink Press and enter to win a Kindle Fire and some FREE books!  Don’t worry, I’ll be doing an online raffle as well for those who can’t make it to comicon. Stay tuned for that info!