Over 6,400 people have died this year due to terrorism. 6,491 souls already gone in 2015 because someone just doesn’t fucking like the way you look, the color of your skin, where you’re from, or whom you pray to…or for whatever other fucked up reason they can come up with like, you know, they think they’re the rulers of this world.

Look, you may or may not want to know what’s happening in the really real world because that’d make the horrors, well, REAL. I get it. You’re safe in your house in [insert city here], USA or wherever. Live vicariously through your television or computer. But there are people in the world who aren’t feeling the same, and you know what? That could very easily be you. If you’re laughing at that, it tells me you haven’t really studied history. I just want to point out what exactly has happened in the past year, and you should (I certainly can’t make you) read it. It’s not like I can twist your arm, and it’s probably a good thing they haven’t made that possible through the interwebz.

THIS is what terrorists have done in 2015 up to this point, but I’ll highlight a few of them below:

In January, over two thousand people died. 2,349 to be exact. I’m not including the perpetrators in these numbers. This was also the month when Boko Haram kidnapped 40 boys and young men in Nigeria. Two attacks in this month occurred in France, one of which was the Charlie Hebdo attack where 12 people died for the drawing/printing of a cartoon of the prophet Muhammad.

In February, 179 people died in Nigeria, Pakistan, Ukraine bombings, Denmark’s mass shooting, and Boko Haram killed at least 91 people by shooting and burning them. Burning them. They burned mosques and churches in Cameroon.

In March, it was 308 who died in Yemen, Turkey, Afghanistan, Egypt, India, South Korea, and Tunisia in bombings and attacks and shootings.

On April 1st, 147 people died in an attack at Garissa University in Kenya. 316 total died throughout the month.

In May, 279 people died in bombings and attacks throughout the Middle East. You’ve been desensitized to this news so it’s really no longer news, even though 279 people died due to violence.

In June, 704 were killed and the only one you probably know about is Charleston, SC where 9 people were killed during Bible study, but nine days later, a person was decapitated in France, their head—with unknown Arabic writings on it—placed near the entrance to a factory in Lyon where they blew up a gas canister.

In July, there were 854 people murdered, 145 of which were killed in numerous mosques in Nigeria by Boko Haram. These assholes pretty much dominated this month alongside the Islamic State with death tolls.

In August, 321 were killed, most occurring in Iraq and Afghanistan.

In October, 617 people were killed, 102 of which died during a peace rally in a suicide bombing on Ankara central station in Turkey, and 224 died in the suspected bombing of Metrojet Flight 9268 over Egypt, which I believe Russia has now confirmed.

In November . . . 273 have died halfway through the month. As you know, approximately 137 people died in the three attacks on Paris on Friday the 13th. On the same day, 19 died in a bombing in Iraq. The day before, 43 people were killed in a bombing in Beirut. And all three were perpetrated by ISIS/ISIL. Since writing this, just before publishing, I’ve had to add another 32 for the Boko Haram bombings in a farmer’s market in Nigeria…again.

No, these numbers don’t include fallen police officers and/or people killed by police officers in the U.S. or elsewhere, because THIS post focuses primarily on terrorists, but still, re-read that centered, bolded sentence above again.

Fourteen years, ten years, one year, one month, one day, every day—it doesn’t matter when or which country is being attacked by terrorists. The point of the matter is that we are ALL being attacked. Click on that link and look at that list. It is worldwide. This is not a “country” problem; it is a “world” problem, and it needs to be resolved. If we as a people—the human race—don’t stop this, there won’t be a world left worth living in because they’re blowing it to hell in a handbasket. 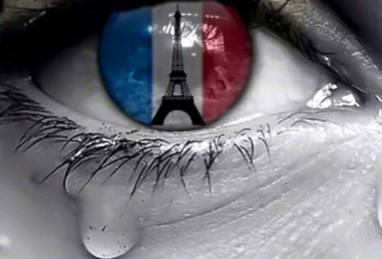 My heart broke for Paris and Beirut when I heard the news Friday afternoon, and I have been watching Syria, Iraq, and pretty much the majority of the Middle East with a heavy heart for a while now.

Stop making these acts part of your fucking agenda.

Stop blaming these attacks on anyone other than the terrorists.

Stop making it about race or creed or politics or ANYTHING other than what it is–people killing people.

I spent most of my weekend offline because after seeing that horror occurring in Paris and Beirut, I couldn’t bear to watch people on social media tear each other apart/down with blame and shame and guilt for showing one or the other some small token of support in whatever way they could, be it a French flag or links on where to seek help for those in the affected areas. I cry for the dead, and the disrespect shown them. I feel for those taken from this world, and those who cannot find it in their hearts to feel. I mourn the loss of so many lives taken before their time, and the dignity and compassion that is lacking in those who judge the rest of the world.

It doesn’t matter how or when or where it happened. What matters is that people are dying at the hands of men who want to blow this world apart and force you to live the way that they want you to. It doesn’t even matter which group it is. No one is more prominent than the other right now because at least three of them top that list.

As far as the Syrian refugees go? These people have lost their lives, livelihoods, and their homes. They need help. What happened to…

“Give me your tired, your poor,
Your huddled masses yearning to breathe free,
The wretched refuse of your teeming shore.
Send these, the homeless, tempest-tost to me,
I lift my lamp beside the golden door!”

…this country so proudly once claimed?

We once said “no” to Jewish refugees as well, and placed Japanese-Americans in camps on U.S. soil during WWII. And if you think either one of those is okay and those folks aren’t scarred (just talk to George Takei about his memories), then I am sad for you as well, my friend. Very sad, indeed.