First, I’d like to wish you all a wonderful Christmahannukwanzadan, or whatever you celebrate. Umi and I are celebrating in a small way, in that it’s just the two of us. 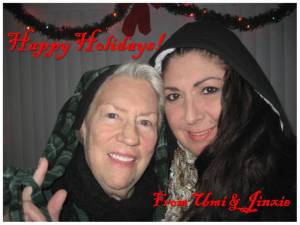 Second, I just released another book! It’s the first of my Prophecy series, and it’s loaded with vampyres, werewolves, and gods and goddesses. This book is the revamped (pun intended) version of The Vampyre Prophecy, so for those of you who read the original, I’m so very sorry. I split the original book in half, sort of. The Dracove is book I, and Gods & Vampyres is book II, which will be released in January provided my professors don’t drive me bonkers.

How much time do we really have before we die, and does immortality truly exist?

The Dracove by NL Gervasio

Kylie O’Rourke has unwittingly walked into the path of two vampyres—one who wants to use her as a sacrifice, and one who only wishes to win her heart. As she is pulled into their clandestine world, she learns more about her history and the reason behind her horrible nightmares.

Master vampyre Cianán searches for the one woman who could take his immortality to the next level—godhood. But, when he finds his Chosen One, his progeny Grantlund stumbles onto the Master’s plan . . . again. As if losing his first sacrifice to the bastard wasn’t enough, the Fates were to torment him with a second time.

NL Gervasio‘s book The Dracove is now available for purchase! Just click on the book cover and it will take you to the book on Amazon.