I’d like to preface this with the statement that regardless of what I do or how wonderful my trips may be for however long I’m gone, whenever I return home, something goes inexorably wrong. Something. Anything. It really doesn’t matter what it is, but it will go awry upon my return. Not before. Always upon or shortly after my return. I remember thinking this very thought as I stood on Lora‘s back porch at 3am (that’s AZ time, which makes it 5am MD time) two nights before I was to leave for home. Something will go wrong when I get home. Please don’t let it be my ‘lanche. God forbid should that happen! Tempe isn’t New York City. Everything is NOT accessible in this state.

I’d also like to point out that this particularly wrong thing was preventable, if I’d had the means to prevent it, AND if I’d remembered. Yes, remembered. Because I’m horribly forgetful in my aging years. I’m hoping after the 8th said wrong thing will no longer be an issue.

This is also on top of my being sick and returning home with the Con Plague of the Century. Most of you know that even with my “compromised immune system,” I rarely actually get sick. So this was a bit of a shock for me, but then made sense later on as I evaluated all the goddamn altitude changes and barometric pressure changes I suffered through with a train ride to Boston and two flights. There were times when my head felt like it was going to explode, and that last landing in Phoenix nearly killed me.

Yes, I’m being overly dramatic. Yes, it’s on purpose to make you laugh. If you didn’t laugh at that shit, something’s wrong with you and you should sue the doctor who removed your funny bone.

Anyway, this is the reason I thoroughly ENJOY myself on these little “vacations.” Nothing goes wrong until I get home. One of these days, I’m never coming home again.

I’ll now return you to my regularly scheduled blog…

We at the Zombie Survival Crew rarely show you any behind the scenes stuff (okay, we NEVER show it to you), and quite honestly, you might be a bit worried about us if you witnessed it. You’re probably already worried about us considering some of the posts that do go up. However, since I can’t post that crap on the ZSC website, I’m going to give you a little peek into the ZSC behind the scenes stuff here on my sweet little ol’ blog that you never get to read about or witness. This shit is the reason I think the ZSC should have its own damn reality show. One of these trips, I’m seriously going to have a camera follow me and mainly Juliette around so I can take a look at what kind of material there is. Then I just have to figure out how to pitch it and who to pitch it to.

And Juliette just had a heart attack, I’m sure. *pats her on the head* It’s okay, boss lady, I got this.

As I boarded my entirely-too-early flight Thursday morning (the 10th), the thought didn’t even cross my mind of just how insane this weekend would be…mostly because I was still asleep. And I was going to be back east for 11 days, so HorrorHound weekend was just the start of it all!

Since I wasn’t flying standby, the flight should have been a breeze. And it was…until I got to the Minneapolis/St. Paul airport that is a MILE LONG between concourses. Needless to say, my legs arched most of Friday. No, I did NOT see the tram. This airport is also where I paid $34 for TWO glasses of wine. No, I’m not kidding. I wish I was. That is the most expensive double shot of wine I’ve ever had, and I’ve eaten in a five-star restaurant. Recalling what I drank, the fucking BOTTLE of wine doesn’t even cost that much.

But you don’t want to hear about that crap. You want to know about the hilarity that happened at lunch on Friday with Michael Rooker, Jimmy Duval, Noah Hathaway, Jack Tillery, Juliette Terzieff, and myself.

First, I’d just like to say that I absolutely LOVE these guys now!

Second, there should have been a camera on us. Hence, the aforementioned ZSC reality show.

Third, after remarking about how much room he had in the front seat of Juliette’s 4Runner, here is the photo Michael took with Juliette’s iPhone of those of us squished in the back. 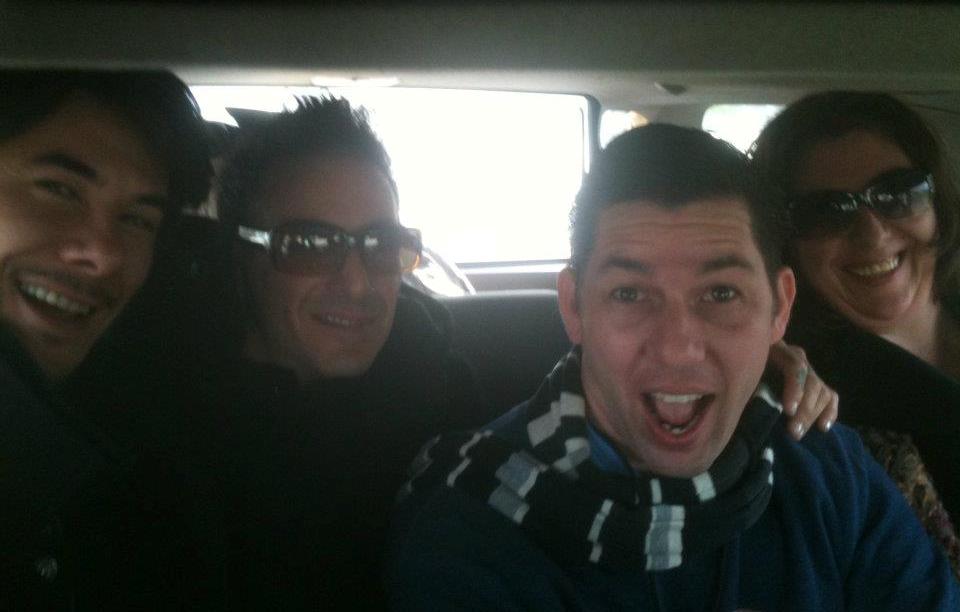 Thanks, Mike. You’re lucky I love you to death!

Regardless of the lack of space to and from lunch (and I’m told that it was hilarious seeing us unfold from and climb out of the back upon our return to the hotel), lunch itself was wonderful and filled with some of the best conversation I’ve had in a long time, aside from one group member being a lesbian trapped….well, you know where that goes. What? I didn’t say WHO it was! Calm down, Juliette!

Friday evening found Juliette, Lora, Sarah (of the Dixon’s Vixens), and myself with Rooker at a FedEx/Kinko’s trying to get some last minute copies of photos done so he had enough of everything for signatures. Last minute being 11:30pm and they closed at midnight. After some persuading, the guys working decided they could do it right then. I probably don’t have to tell you, but Michael is one of the funniest guys I’ve ever met. And he truly is more insane offscreen than on. I enjoyed helping him set up and tear down his booth, and watching Juliette run around like the crazy lady she is so Rooker could have a wonderfully flawless weekend! You’re welcome, Mike! We love you too! 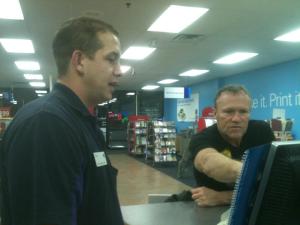 Thanks Zac and Adam for doing an awesome last minute job! You guys ROCK!

By the way, this was on Juliette’s birthday. I think we ended up at the hotel bar, but don’t quote me on that. The whole weekend kind of blurred together. LOL

And since I’m internetless at home temporarily and it’s 2am, I’m going to stop here and throw this at you…

Behind the Scenes to be continued…

Next post: Brian O’Halloran, pool parties, and “It’s the Captain!”