Today, I’m going to teach you all about Track Changes in MS Word. If you don’t know what that is, that’s okay. I’ve encountered many writers over the last few years who haven’t a clue. I’ve taught them via phone and email; I can teach you through a blog post. Actually, it’ll be easier this way because I can “show” you too. 🙂

I work in MS Word 2007. You may have an older version, or a newer version—or you may need to work in RTF (Rich Text Format), which still requires some sort of word processor, but I can still help you either way. Before we begin, let’s talk about what format to save your file as and how to do that. The most common type of file to save your MS (manuscript) as should be RTF. The reason for this is because you never really know who has a PC and who uses a Mac. A Word doc (.doc) can be created on a PC and transferred to and opened on a Mac, but it won’t work the other way around, Mac to PC. It’s just picky that way, at least with the older versions. If you’re on a PC and you don’t want to save in RTF, then at the very least save your file as a Word 2003 doc. A lot of people don’t have the newer versions and 2003 will not open a .docx file, which is 2007, so I think it’s pretty safe to say 2003 also won’t open the 2010 version as well. If you’re using a Mac, I’d strongly suggest saving your file as an RTF. It still looks like Word. It just means anyone can open it, regardless of their version of software or type of computer.

On to Track Changes

I’ll attempt some screen shots for you, but I’ve adjusted my Word to the point that certain things just don’t show up anymore, so now I have to search for them in order to show you. I have to “make” them happen. It’s kind of like magic. 🙂

To use Track Changes to apply edits for someone else, such as a critique partner, you’ll need to click on the ‘Review’ tab at the top of your page and then turn on Track Changes by clicking on it (it looks like a button; check the photo at the top of this post). If you’re a keyboard command type of person, press CTRL + Shift + E. In Word 2003, I believe you can find this under the ‘Tools’ tab. Once you turn Track Changes on, you’ll notice it’s highlighted and when you begin typing, it looks like this. Of course, it’ll be red or some other color. WordPress wouldn’t let me change it and I’m not a codemonkey, but there’s a screen shot coming up.

In this first shot, I’ve changed the indent because the paragraph wasn’t indented. You’ll notice to the right there’s now a comment indicating what I did. Only when you make formatting changes or add a new comment will this show up. 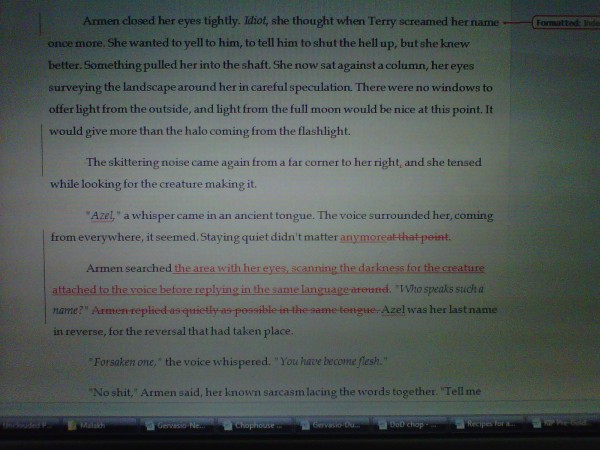 Whenever you make any changes within the document, they will look like above—adding or deleting punctuation, deleting or adding words, etc. The changes will show up in the document, and the color will change with each editor, where the author will see them and can apply the changes as they see fit. We’ll get into that momentarily. Yes, you get to see how many documents I had open while creating this post for you. And very likely, those changes you see in that manuscript (MS), I forgot to add them to my MS because I made those changes here. Such is my life, but at least I have a photo to view in order to see what I’d done.

Continue to make your changes throughout the document. You can add comments to the right by clicking on ‘New Comment’ in the top menu. These are primarily for asking the author/writer questions, or pointing things out in more detail rather than just rewriting the author’s sentences.

Now we’re going to go over accepting/rejecting changes. To approve/reject edits made by someone else, you’ll also need to make sure Track Changes is turned on. I’m not certain the comments will show up if it’s not, and I’ve heard they don’t, especially when the document is RTF (Rich Text Format).

When I place the cursor before the following paragraph and then hit ‘next’ in the menu, Track Changes highlights the change I made. This is a format change, so it’s highlighting two paragraphs at once. Once I click ‘Accept’, Track Changes moves on to the next edit, which can be seen in the next photo. 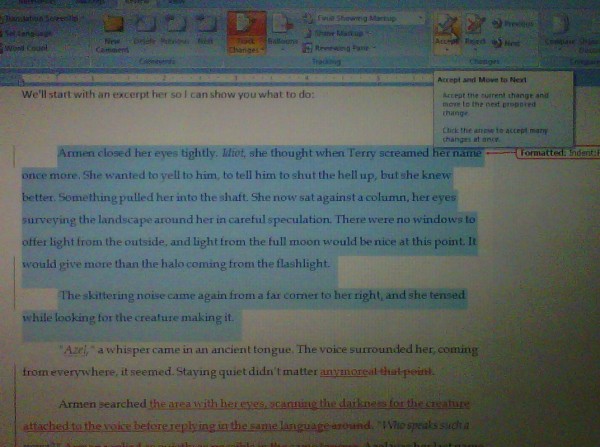 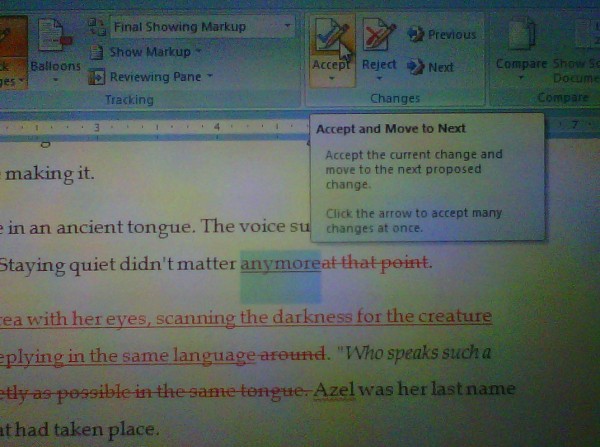 As I keep clicking ‘Accept’ or ‘Reject’, Track Changes will make the edit change or not, and move on to the next edit.

The tricky part is if there are actual comments. As an editor, I advise authors/writers to read the comment(s), apply changes within the document if necessary, and then ‘Reject’ the comment itself during the Accept/Reject process. Otherwise, the comment will remain visible.

Once finished with all edits, this little window will pop up. 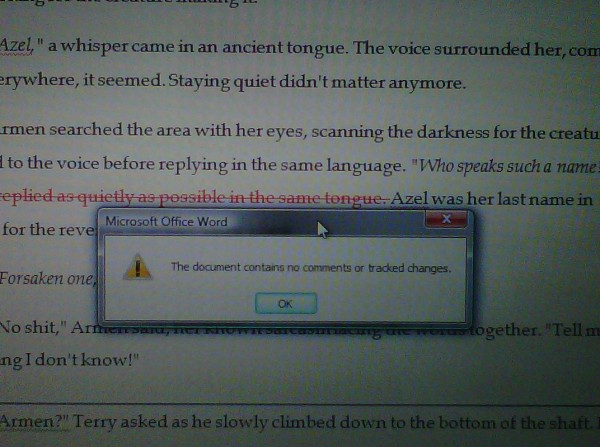 Congratulations! You’ve just gone through your first session of Track Changes. Liberating, isn’t it? 🙂 Whether or not you think so, trust me, your editor will be pleased. Especially if you pay attention to Formatting, which will be my next post.

Yes, it’s just that simple. Ask your questions in the comments area and I’ll do my best to answer.

NOTE: One last thing. PLEASE always rename the file, either with your initials attached to the end of the original title, or your name with the word “edits” at the end of the file name. I personally don’t want the edited copy to override my original document.

Thanks for stopping by!