I’m just exhausted from the past weekend. Let me tell you why…

Last Wednesday afternoon, I left for Chicago to spend the weekend working the Zombie Survival Crew booth at the Wizard World Comic Convention, since, y’know, I designed most of the ZSC gear, and because I hadn’t been to one of these things since January. My long weekend started off quite smoothly as I was able to hop on the first flight (I was flying standby) and I landed in Chicago around 8:30 p.m., where I then took a cab to the hotel to meet up with Juliette who wouldn’t be arriving for another hour or so. Upon arriving in the hotel, I discovered it was under construction. I’m thinking at this point that I just cannot escape construction areas on buildings I have to sleep in, between my apartment and this damn hotel, though I later discovered that it was hit by the flooding a few weeks ago, so I’ll cut them some slack. Regardless, I also discovered upon my arrival that the elevators were out of order. Okay. No problem. I need the exercise and I’m never one to decline the use of stairs.

Our room was on the third floor.

After climbing to the third floor, which I immediately knew I’d hate by Sunday, and traveling down a short hall, I turned the corner to find this…

Yeah, tell me that doesn’t SHOUT “The Shining” to you! I know, right? Our room was the VERY LAST ONE. With each passing evening upon our return (and usually after having several drinks), this view became quite hilarious. To give you a bit of perspective, here’s Juliette starting to walk down the hallway Thursday night.

Friday went well, and we attended the VIP party that night, but then we were slammed on Saturday. Every time I even thought about sitting down, people would walk up to the booth. 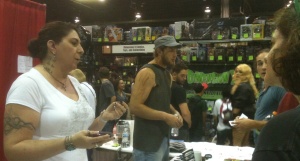 Great for ZSC, not so great for Jinxie, but I survived the day and we went out that night. *ahem* Yeah. Let me tell you about that night if you weren’t paying attention to Twitter or Facebook during my bitch storm. I’ll refrain from naming anyone, and this is my personal blog. I won’t even go into detail other than to say that when someone knows they’re going to be walking a mile to get to their destination, it’d be nice to let the woman wearing the 5-inch heels to also know this information. The result was me rolling my ankle on an incline near the end of the walk, which resulted in me tumbling to the floor. Luckily, there was a very nice couple walking with me who helped me up. I don’t know who you two are, but bless you both! Also, I’ve had a huge blister on the bottom of my foot for the last four days. It’s finally starting to heal, but it’s a real pain in the ass to walk. Regardless, once I was past my anger and finished bitching (but let’s be honest here; I’m always bitching), the night proved to be quite entertaining. We ended up at Red within the Hyatt once again, where we had the waiter of awesomesauce, Nate.

Sunday, I was mostly walking around barefoot. Though Sunday wasn’t as crazy as Saturday, where we almost had to take serious action because Juliette was bitten, we still had many people approach the booth and remained very busy. I’m certain exhaustion showed on all of our faces. I know I was dragging. Then, this guy showed up…

…and holy crap, was he ever tall. He makes ME look really short! Paul (guy making mean face to the right) is 6’6″, and this guy (I cannot remember his name to save my life, but I think it was Dave – four days of meeting people is not good for Jinxie’s memory) was probably three inches taller than Paul, who said, “Jinxie, why don’t you get your picture taken with this tall drink of water.” *smh* Yes, I stuttered and stammered and felt like an idiot when he walked away, and I’m hoping he’s not reading this blog right now because I’ll feel even more like an idiot.

Go ahead, laugh at me. I’m laughing as I write this. We ALL know Jinxie likes tall men, and the long black hair is not helping to deter my distraction while I talked to another group.

On to Monday…and my day of hell that now officially has Mondays on the To Loathe list, slotted right up there in the Top 5.

I arrived at the airport around noon-ish, got my boarding pass and breezed through security. The 2:15pm flight I was slotted for was full. Okay. No problem. There was another at 5:15pm…which also ended up being full.

There were no more flights that night, so I was stuck at O’Hare International Airport overnight  because the next flight was at 5:15am. Once I called customer service for US Airways and got myself bumped to that early as hell flight, I decided to make myself comfortable, kick back, and have a shot of Jameson and an Amber Boch (the bar didn’t have Guinness *gasp*). I designed three of five book covers while sitting in the bar, and discovered the airport doesn’t have free wi-fi, which I think is just stupid!

Did you know that airports pretty much shut down in the middle of the night? I had no idea, but then, I haven’t flown that much. In fact, this trip was the first time in 13 years.

Thanks to my wonderful Twitterati, who kept me entertained throughout the night, even through my zombiepocalypse tweets, where I made a plan in the event the zombiepocalypse struck the airport while I was there through the night. I think I’ve officially lost my last sane brain cell after that night.

Once through the night, a wonderful gal named Leticia, who works for US Airways, got me the VERY LAST SEAT ON THE PLANE for the 5:15am flight. Bless you, Leticia! You fucking ROCK, and were my only decent experience at the airport that night! We flew over a couple of storms and I think I saw the stratosphere, as well as a forest fire somewhere in Arizona. We landed just after 7am, I claimed my bag that had to be checked last minute, and I took a taxi to Aunt J’s house to retrieve my ‘lanche.

Surprisingly, I only slept 7 hours that night, but I definitely made up for it today with a 12-hour sleep.

I’ll leave you with one last thing, which is both the reason for the title of this post AND the best t-shirt EVAH!

*I apologize if this post seems rambling. I’m still tired as hell.