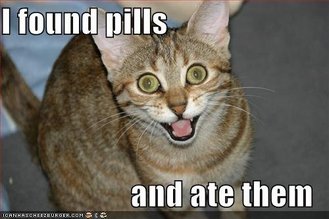 1. The pinched sciatic nerve in my left hip is, well, pinched again. And it hurts like a mother … No, really. Unless you’ve experienced a pinched nerve, you have no idea of the amount of pain I’m in right now.

2. Oh yes, we’ve been here before. Remember? The reason I lost my last job. Deja vu, I’m tellin’ ya. Hopefully this won’t continue down that same path.

3. I won’t even go into the ex regarding the whole me being injured thing because this will turn into a rant.

4. However, I have Tramadol now … because the Percocet and Diazepam weren’t really working.

5. Why the ER gave me Diazepam, I have no fucking clue. I know it’s Valium. Yes, there might be some anxiety issues there, which is making my back one giant knot, but I need a muscle relaxer! Last time they gave me flexeril. That’d be nice. Those worked.

6. Off topic … the distraction now has a nickname  – Ozzy. If you know who I’m talking about and you’ve seen his Twitter avatar, you’ll understand why.

8. He’s also a musician. Yes, he’s taller than me. We know how important that is. Why? Because Jinxie loves her high heels. *giggles*

9. He also shares entirely too many of the same qualities as my cousin Lo-Lo’s boyfriend, including their name.

10. However, Ozzy is still a damn distraction, even while I write this blog post.

11. My ADD is working overdrive right now because I’m essentially stoned out of my mind with these meds: Tramadol, Percocet, Diazepam, and something else I can’t remember the name of.

12. I think it’s cracking Ozzy up … we’ve been on the phone throughout this blog post and my stonedness.

13. So let me tell you what sucks about the fact that he’s on the other side of the Atlantic.

14. Timezone. It’s a bitch now that I’m working. It’s going to be even more of a bitch when he starts a new job tomorrow. We’ve figured out that he’ll be at work while I’m sleeping and he’ll get off work when I start my job in the morning. This really doesn’t leave us any time to talk during the week.

15. Which means I may be a cranky bitch this week if I can’t hear his voice.

17. So it might be worse. I’d suggest a fallout shelter if you have one.

19. I need to go work on my Nemesis edits now. He and the kitty both have me on a deadline, which is coming up very quickly and I haven’t been alert enough to work on it the past few days.

3 thoughts on “Deja Vu Anyone?”