This may take a minute or two because I’m still rather brain dead from the move last weekend. Excuse me.

Okay, so I’ve reached this point in my life where another chapter is ending (a big one too), yet the next hasn’t quite started, kind of like placing the bookmark between the pages before you pick it up to read again. I’m in a state of limbo, transition, whatever you want to call it. And I’m fine with that because I know that what’s coming is good. I mean, I’ve already been through hell once again, right? No, I’m not going to say it, although in my experience with the universe, you only have to think it.

I’ve mostly successfully moved to Tucson and now live with Kitty. By mostly, I mean that I haven’t finished getting all of my stuff from the ‘Copa house and storage. There’s quite a bit left too, but it’s mostly boxes and gardening stuff. However, as you can see from this picture… 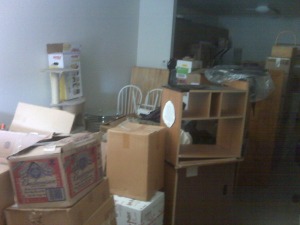 …we don’t really have the room right now. Actually, it doesn’t look like this anymore. We moved the desk on Sunday because it was basically blocking everything else. But this is a shot from the other end before I started moving things around and unpacking…

Kind of frightening and overwhelming, huh? Nah, not so much. We girls got the washer and dryer all hooked up too, after two trips to Home Depot because I had to change out the dryer’s plug, since I moved from an old house to a newer one. We had to change from a 3-wire to a 4-wire plug. That was entertaining and is all documented somewhere on Twitter (ie. my favorites)

This was taken yesterday, I think…

See? It’s getting better. In fact, I just put the kitchen table together and set it up a bit ago, and all the small appliances are now in their place.

There are probably about three posts that I should write before this one because they contain information that’s relevant to this ending chapter in my life. But for some reason, this particular one wants to be written now, and I must obey as I’m only the messenger for the voices in my head. I’m also working on unpacking while writing this, so I’ll write a bit and go work on that, and then come back to this.

Oh wow! I got way sidetracked. That’s what happens when I try to blog in the midst of putting a house together…and ordering business cards…and changing my address.

Okay, so where was I? Chapter’s end – closing this chapter of my life. I’d say it was probably one of the biggest chapters aside from my marriage, but this was essentially a marriage without the legal documents. And let’s not forget having to take care of Umi, which I’ve now passed off to Akhi. Umi doesn’t want to move out of state anyway, so it works out, and I do plan to leave the desert far behind. The heat is killing me at this point. I need moisture in the air, if only a little. I live for that two weeks of monsoon season now. I don’t even care how humid it gets. Besides, the lightning shows are fabulous!

So, about three-fourths of the way through this chapter of my life, the walls around my perfect world once again came crashing down and I hit a tailspin into the downward spiral toward hell. I will say, however, that when I fall, I do it on a spectacular level, plummeting down the spiral, not really knowing where or how I’m going to land. It’s such fun! My life is kind of like watching a phoenix burst into flames, disintegrate to ash, and rise again. This is the second time I’ve been reborn, and it’s part of the reason I’d like that tattoo covering my back someday.

I’m now ready to begin the next chapter of my life, so I’ll end this post with a song that speaks volumes to me right now. The link to the song is here.