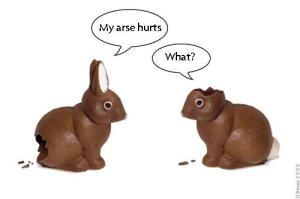 APRIL FOOL’S! THERE IS NO POST!
Kidding …
However, I am not kidding about the fact that this post has the potential to offend you if you’re overtly religious, but let’s face it, folks, God has a freakin’ sense of humor too. Otherwise, we wouldn’t have a sense of humor and there wouldn’t exist such a creature as the platypus. Point shot and hopefully taken. If you’re too narrow-minded to get that, you have no business being on my blog. GET OUT! If you choose not to leave, I’ll have Zombie Jesus chase you out. 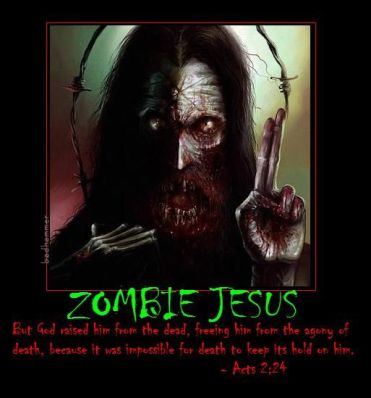 Watch out, he’s mighty fast, that Zombie Jesus.
Now, on with our story …
A few weeks ago, I spent a week down in Tucson taking care of a sick kitty, HC Zuerner. Well, in order to take care of ill kitties, one must go to the store to prepare for the week, so that’s exactly what we did—headed down to the Fry’s Marketplace, which was the closest and still open that late because Kitty and Jinxie are both extremely nocturnal. As we’re perusing the aisles, mainly the Easter section—btw, it’s not even St. Patty’s Day at this point—I turn to Kitty and ask, “When is Easter anyway?”
She furrows her little feline brow and replies, “I think it’s on April first.”
I stop dead in my tracks, my head falls back, and a loud belly laugh echoes through the store. “Oh. My. God. How perfect is that?” I raise my hands in a displaying gesture, also known as the Jesus Christ pose. “April Fool’s, I’m not dead.”
Kitty and I both lose it in the store, doubling over in fits of laughter. Not long thereafter, we realize that Easter is not on the beloved April Fool’s day, but occurs three days later …
*ahem*
YES, IT STILL APPLIES! 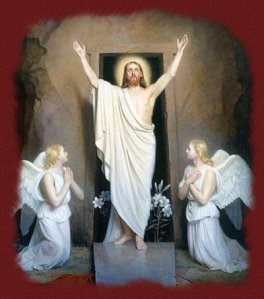 “April Fool’s, I’m not dead!”
This is by far the best year ever!
After I got back to the Phoenix area, I stopped by my g-ma’s house to see my Uncle T one last time before he headed back to Oklahoma, Oklahoma, Oklahoma … sorry, I can’t help it that Steve Martin is screaming that in my head every time I say it.
I proceeded to tell Uncle T about the Easter/April Fool’s thing and he of course laughed because Uncle T has a great sense of humor. This time, however, I added, “I’m so going to Hell.” I was in g-ma’s house, after all.
Uncle T, God bless him, responded with, “Catholics don’t believe in Hell, honey.”

That perked me right up. “Oh shit, that’s right … wait, I’m not Catholic. Crap, I’m still screwed.”
He just laughed at me and we got into one of our many religious discussions and how the devil didn’t exist until only a few thousand years ago. I love those conversations with him.
So my question is: What happened to all those people before Hell was created, hmm? Did God just say, “Well, we don’t have a place for you right now, so you get a free pass” to everyone who walked through the pearly gates? Are there really pearly gates?
I believe Gehenna exists because I live in it. There’s no other way to explain my so-called life.
Happy Easter, everyone!